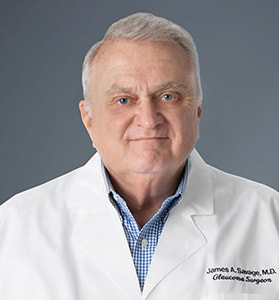 James A. Savage, M.D. received a B.A. in Chemistry from Northwestern University and his medical degree from the University of Cincinnati in Cincinnati, Ohio. He completed his internship at Baylor University Medical Center and his residency in ophthalmology at Ohio State University Hospitals in Columbus, Ohio, where he served as Chief Resident from 1978 to 1979.

Dr. Savage completed a clinical fellowship in glaucoma at the Massachusetts Eye and Ear Infirmary at Harvard Medical School and has been in private practice for 40 years.

After a successful career in amateur golf, he became a rules official for national and international competitions. In the off-season, he makes scale military models for veterans.

He and his wife, Mary, with their two daughters live in Memphis.

Eye Specialty Group is an ophthalmology practice located in Tennessee and north Mississippi, focusing on LASIK eye surgery, laser cataract surgery, eyelid surgery and more. The material contained on this site is for informational purposes only and is not intended to be a substitute for professional medical advice, diagnosis, or treatment. ©2022 Eye Specialty Group. All rights reserved. Designed by Glacial Multimedia

No Surprises Act
Back to Top